Fish spas are all the rage now in the world, so how do you differentiate the authentic Garra Rufa from the FAKE Garra Rufa (Chin Chin fish)? 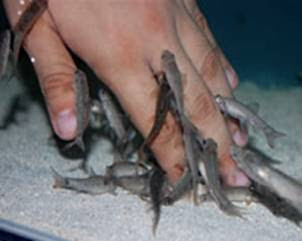 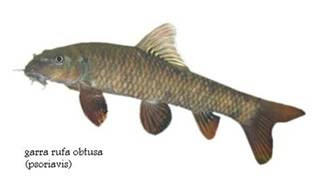 Scientific Name: Garra Rufa
Nickname: Doctor Fish
Who named it as Dr. Fish: A group of well-known professors after research has been done. It has been named Doctor Fish before Chin Chin came into the picture for more than a decade.
Origin: Kangal, Turkey
Research: Scientifically proven by many well known universities for its supernatural ability to cure skin problems.
History: More than 100 years of saving many from skin problems.
Why this fish appear in the market: It appears more than a decade ago and never intend for exporting. Due to a great research white paper done by Austria Medical University (one of the largest medical research university in the world) and published by Oxford University Press, it became popular overnight.
Therapeutic Effect: Helps to relax mind while nibbling, the process also alleviates beautification and smoothness to our skins.
Price per fish in the market: RM 30 per fish
How many fish is required in Fish Spa: Normally at least 10,000 fish is required in fish spa, depending on the setup.
How much to invest for a fish spa with this fish: RM 30.00 x 10,000 = RM 300,000.00
Will the fish die easily: Yes, depending on the spa set up. It is more into a question of environment adaptability.
How big can the fish grow: Largest it can grow is only about 6cm - 8cm. It will never cause pain, cause it is a toothless fish.
Why this fish is used in Fish Spa: To provide the BEST and QUALITY fish therapy experience to their customers. 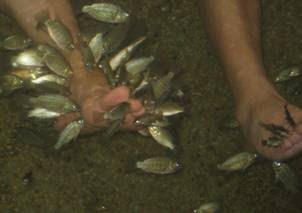 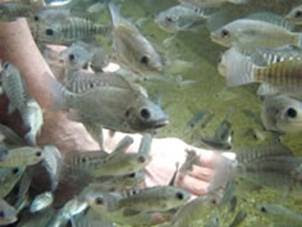 Scientific Name: Tilapia, Talapia
Nickname: Chin Chin Fish (Kiss Kiss Fish), also claimed as Doctor Fish
Who named it as Dr. Fish: The China breeders who wanted to market this fish, named them as Dr. Fish, so it is easier to sell to the market. Chin Chin Fish is named as Doctor Fish because Doctor Fish is not a trademark or registered.
Origin: Chengdu, China
Research: No Research was done
History: Gained unscrupulous popularity by claiming as Garra Rufa or Doctor Fish to the uneducated market.
Why this fish appear in the market: Just started 2 years ago when the Japanese started the first fish spa in Asia using the only real and original Garra Rufa from Turkey. Apparently, Chinese see this a big market and great opportunity for fish spa business across China . However to start fish spa with authentic Garra Rufa, it requires huge investment and the supply of authentic Garra Rufa is rather low. So, the Chinese trained a new fish by starving them just for the sake of attacking our skin when we put our foot into the water, and claiml it as Doctor Fish.
Therapeutic Effect: No significant therapeautic effect.
Price per fish in the market: RM 0.40 per fish
How many fish is required in Fish Spa: Normally at least 10,000 fish is required in fish spa, depending on the setup.
How much to invest for a fish spa with this fish: RM 0.40 x 10,000 = RM 4,000
Will the fish die easily: Yes, it is a cannibal fish. It eats each other.
How big can the fish grow: It is useless when it reaches about 6cm, the sharp teeth are growing and it could be dangerous. So, Fish Spa owners are usually advised to replace with smaller one.
Why this fish is used in Fish Spa: Cheaper and easier to start a fish spa. Some fish spa owners may be cheated for authentic Garra Rufa. But, when they find out, it is too late, they have NO choice but to cheat consumer for the ROI. Worst are for those who know about it, and still telling customer it is Garra Rufa.

Do U think these fish works?

For my own opinion, I prefer let ppl do foot massage.

thanks for the heads up. now i know the difference

wah, scary to use a toothed large fish to nibble ur skin!

So that means there's absolutely no authentic fish spa in Malaysia ?

I won't be surprised, all the ones out there now are FAKES.

Oooo. I notice the difference too. A while ago when the fish spa just came out, I saw the original Dr. Fish, it was very small in size. Then suddenlt fish spa is mushrooming everywhere. Then I saw the fishes in Ikano fish spa they were huge like the China's one you show on the picture. Now I can confirm it is fake.

Thanks for sharing this.

thanks for informations, so many imitation ! not easy to get the real one !!